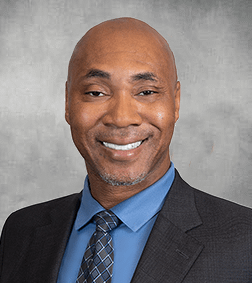 Terry Jones grew up in a military family.  After graduating high school, despite receiving several athletic scholarships, Mr. Jones followed his family’s footsteps and enlisted in the United States Marines.  He is a Gulf War Veteran and served in other conflicts around the world.  After his military servicey, Mr. Jones worked as a law enforcement officer in Arizona and California for over 20 years.  During his time in law enforcement, he worked in patrol, gangs, and narcotics before being promoted to Sergeant.  As a Sergeant, he supervised and trained other officers.  While serving his community as a L.E.O, Mr. Jones completed his bachelor’s degree in Criminal Justice and master’s degree in Management.

After 20 years of working in the criminal justice system, Mr. Jones left law enforcement and attended Florida Coastal School of Law, where he volunteered at the Public Defender’s Office in Jacksonville, Florida.  After passing the Bar, Mr. Jones worked as a State Attorney in Daytona and Tampa.  With years investigating, litigating, and testifying in criminal litigation, Mr. Jones now uses his expertise to defend the accused.  As an expert in law enforcement protocol and procedure, Mr. Jones understands what it takes to successfully defend clients and and assist clients in understanding the criminal justice system.  Terry is an world traveler and has visited over 15 different countries.