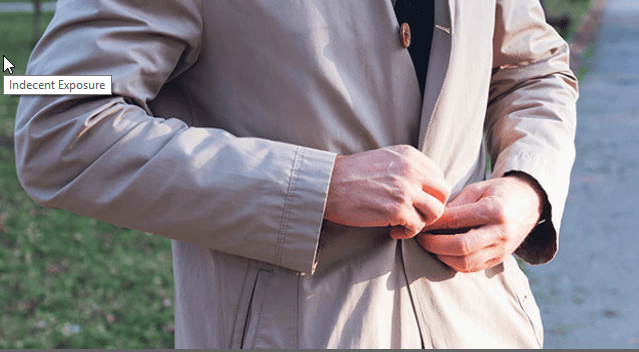 Protect Your Future with Musca Law

Imagine you are out camping and need to use the restroom. Being out in the woods, there are no bathrooms available so you go wherever you can find. Unfortunately, there was someone by you who saw what you were doing. Although you are engaging in a seemingly innocent act, there are people around who are offended and now they want to seek justice for your actions. As a result, you now face possible criminal charges that can have a lasting impact on you, both criminally and civilly.

In Florida, the act of exposing your sexual organs to another person can be a criminal offense that comes with an array of consequences. Simply being accused of a sex crime can have a very negative impact on a person’s life. Not only do they face possible prison sentences and steep fines, but they are also at risk of losing their job, can suffer strained relationships, and may deal with overwhelmingly negative perceptions from others in their community.

Unfortunately, there are many instances in which people are wrongfully accused of committing acts of indecent exposure. It is imperative for those accused of these crimes to understand the severity of the consequences that they face. Those accused of such crimes should contact a criminal defense attorney in Florida as soon as possible to help them build a strong legal defense against such charges.

Circumstances That Could Lead To Indecent Exposure Charges

In Florida, there are many instances in which people are charged with indecent exposure. Sadly, these individuals often face extensive legal battles to prove their innocence. Indecent exposure is the act of a person unlawfully exposing their sexual organs in an indecent or vulgar manner. These charges could arise from:

In many situations, the prosecutor is required to prove that the accused had lascivious intent in order for the conviction to stick. The court must show that the offender intended to show his or her organs to the unwilling and unsuspecting individuals. Depending on the circumstances surrounding the case, there are numerous legal arguments that can be made against these charges. It is crucial for those accused of indecent exposure to contact a criminal defense attorney in Florida as soon as possible.

Penalties For Indecent Exposure In Florida

Unfortunately, there are far too many instances in which innocent people are falsely accused of the crime of indecent exposure. In order to protect yourself with a strong legal defense to avoid facing these penalties, it is imperative for you to contact a criminal defense attorney in Florida as soon as possible so that we can build a strong and strategic legal defense on you.

Elements Of The Crime

If you are accused of indecent exposure, the prosecutor must be able to prove that all of the following circumstances existed in order to make a conviction.

The act of exposing oneself in and of itself is not considered to be vulgar, unless the act caused one or more people who viewed the act to feel offended or to believe that the act intruded on their rights. Simply proving that a person was nude or that they exposed their genitals is not sufficient enough for a conviction.

Working with a criminal defense attorney in Florida will ensure you obtain the best possible outcome for your case.

Under Florida law, the terms vulgar, indecent, lewd, or lascivious are often used to describe instances of exposure. These terms are all applied under the same terms and include actions in which an unlawful indulgence in lust, wickedness, lustful, sensual, or unchaste act was committed by an offender.

The case of State v. Kees, 919 So. 2d 504, 507-08 (Fla. 5th DCA 2005) provides that an act conducted in a public place is defined as being acts committed in any place that is intended or designed to be frequented by the general public.

Schmitt v. State, 590 So. 2d 404, 410 (Fla. 1991) demonstrates that indecent acts occurring on or near private properties can be convicted upon so long as the court can prove that another person was offended by such acts.

Indecency With A Child

Individuals who are accused of this crime can face a plethora of punishments, including:

Being wrongfully convicted of this crime can have a major impact on your life and freedom. Individuals who are accused of this crime should contact an indecent exposure attorney in Florida as soon as possible.

When individuals commit indecent exposure in front of minors under the age of 16, they can be charged with lewd or lascivious exhibition. Under Florida law, this act includes a person who commits any of the following acts in front of a child:

Individuals who commit this crime can face up to 15 years in prison and up to $10,000 in fines. In some cases, offenders are required to register as sex offenders for life.

If you are facing these charges, it is imperative for you to contact a Florida criminal defense attorney immediately.

Engaging In Acts In My Own Home

The state of Florida defines unnatural and lascivious acts as actions that include performing sexual acts when they are viewable to the public. In some cases, individuals engage in sexual acts in their own homes without the curtains drawn. Leaving their actions exposed to the public view places them at risk for criminal charges. These cases can include:

Individuals who are charged with indecent exposure have a plethora of legal defense strategies available to them. It is imperative that they remember that the court must prove that the accused engaged in such activities with the intent of being lewd.

First, individuals can argue that they showed a lack of intent. For example, a person standing naked near a refuse receptacle may be attempting to bathe and is therefore not engaging in any acts of indecent exposure.

Another argument can be made that the actor suffers from a mental disability or illness and therefore should not be held accountable for his or her actions. If an actor does not have the mental capability to understand something like the fact that urinating in public is not a socially acceptable act, then they should not be penalized for it as harshly.

If a person is under the influence of alcohol at the time the act was committed, the intoxication can be used as a mitigating factor by the court. In such cases, the fact that the individual was drunk or intoxicated at the time they committed the act could reduce the penalties associated with a criminal conviction.

The age of the defendant can be an arguable defense. A child is less likely to engage in lewd acts for the purpose of sexually gratifying or arousing another by exposing themselves to an adult.

Finally, a woman may be charged with indecent exposure for showing her breasts in public. In some cases, a valid argument count be made if the mother was attempting to breastfeed their child.

Finally, there are instances where individuals expose their sexual organs without knowing that another person is around or within sight. In these cases, the defendant can argue that they were not aware of the presence of another person.

Evidence that merely indicates that the defendant was nude is not enough in and of itself for a conviction. Working with a reputable criminal defense attorney in Florida will ensure that you obtain the best possible outcome for your case.

Regardless of whether you face indecent exposure charges as the result of an accident, mistake, or even a prank, it is crucial that you retain a qualified attorney who will fight aggressively to protect your legal rights.

Being convicted of indecent exposure in Florida can result in extensive prison time for both state and federal violations. Individuals who are convicted of these crimes face legal repercussions and they often face an array of negative social consequences as well. Those charged with these crimes can benefit greatly by contacting a reputable indecent exposure attorney in Florida to fight to protect their legal rights.

Unfortunately, there are many times when innocent individuals are wrongfully accused of lewd and lascivious crimes. In any case, it is imperative for you to contact a highly skilled and experienced Florida indecent exposure attorney to work on your case.

With over 150-years of combined legal experience, attorneys at Musca Law have helped countless individuals fight accusations against them. Our knowledgeable team of attorneys closely examine the specifics of each case, in order to build a strong legal defense to help our clients get their charges reduced or dismissed.

Working with our knowledgeable criminal defense attorneys will ensure that you stand a chance at achieving a favorable outcome for your case. Contact our law firm today at (888) 484-5057 to schedule a free, no-obligation case evaluation to see determine how our legal services can best support you and your future.