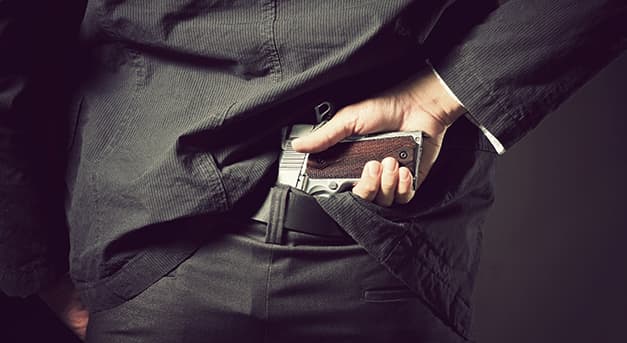 A Florida criminal defense attorney at Musca Law can help you if you are facing criminal charges involving carrying a concealed firearm. This is a very serious offense that may be charged with a third-degree felony, punishable by up to 5 years in state prison and a fine of up to $5,000. There are certain circumstances, however, where an individual may carry a concealed firearm. A person who is licensed to carry a concealed firearm may carry one on his or her person. This offense also does not apply to particular devices meant for self-defense, such as pepper spray or a stun gun.

According to Florida law, a “concealed firearm” is a firearm of any kind that a person has on his or her person in such a manner as it is concealed from the ordinary sight of another person. A concealed firearm may be located in any of the following areas:

A concealed firearm may also be one that a person is carrying in a purse or bag on their person.

Under Florida Statutes Title XLVI, Chapter 790 §790.001,Subsection 1, the following weapons fall under the category of “concealed firearms,” as determined by Florida lawmakers:

Machine guns, interestingly enough, do not fall under the categories of the aforementioned weapons.

Based on the Florida Statutes under Title XLVI, Chapter 790.06 §790.001(9), the Florida Department of Agriculture and Consumer Services shall only grant a conceal and carry license to individuals who are:

Programs for Earning a Concealed Firearm License in Florida

To earn a concealed firearm license in the State of Florida, eligible citizens and resident aliens must also prove their capability to handle a firearm by the successful completion of any of the following programs, as indicated under Title XLVI, Chapter 790 §790.001(9) of the Florida Statutes:

Steps to Obtain a Concealed Firearm License in Florida

The FDACS website also offers a portal to track the progress of your concealed firearm license.

Duration of the Concealed Firearm License in Florida

According to Chapter 790.001 (9), an official concealed firearm license issued by the Florida Department of Agriculture and Consumer Services will be valid for a time span of 7 years from the date it was issued to the applicant. Licensees must carry the license on their person while carrying the firearm and must be prepared to show the license and a valid photo ID to law enforcement.

Anyone who violates these instructions will be forced to pay a $25 fine, which will be payed to the clerk of court.

Which Florida Residents Carry Firearms without a License?

Florida Statute Title XLVI Chapter 790.25 (sub-section 3) dictates that the following people can lawfully own, possess, and use firearms in the state:

As indicated by the Florida Statutes, Title XLVI, Chapter 790.01, Subsection 2, a person who has not been issued a legal license under Chapter 790.06 and carries an illegal concealed firearm will be charged with a third-degree felony. Under the same chapter, individuals who take part in an evacuation due to a public emergency will not be charged with this offense if they have carried the weapon in the first 48 hours since the alert was issued.

Determination of a Valid Conceal-Carry Case

Based on the Florida Statutes, Chapter 790.01 and instructions listed for members of a Criminal Jury highlighted in Case 10.1, members of the court must prove, without any doubt, that:

Once again, under FS 870, Chapter 252, an individual who carried an unlicensed weapon within the window of 48 hours of a “mandatory evacuation” warning should be found “not-guilty.”

Understanding the Terminology of Case 10.01 for Unlicensed Concealed Weapons

Here is a closer look at the terminology set out for jurors in Case 10.01:

“On or about his/her person” refers to having a weapon in an accessible location on or around the body of the defendant.

“Ordinary sight of another person” refers to a witness observing that the defendant had been carrying the weapon.

“Deadly weapon” refers to a weapon that can inflict tremendous bodily harm to a victim.

“Firearm” refers to a weapon that expels a projectile (e.g. a bullet). Antique firearms do not fall into this category.

If the defendant cannot provide proof of carrying the firearm while being involved in an emergency evacuation as issued by the Florida Governor under FS 870, Chapter 252 of the State Law, the jury can find the offender guilty if there is no reasonable doubt towards the elements surrounding the charges, which is on the burden of the defendant or the State of Florida.

As dictated by § 790.01(3)(b) in the Florida Statutes, if defendants have met the burden of production by means of an affirmative offense, members of the state government will have the responsibility to disprove the defense by all reasonable doubt (for example, self-defense vs. willing participation in a burglary). As an example, see the case Dixon vs. the United States (548 U.S. 1) from 2006 for more information about these proceedings.

Grounds for Defense in an Unlicensed Concealed Weapons Case in Florida

A person has a viable defense against any convictions if they have been issued a license to carry a concealed weapon from FDACS and that license has not expired, as indicated under FS Chapter 790.06. Remember that the FDACS is an organization that has been granted authority by the state government to issue these licenses to men and women who meet all qualifications listed in FS Chapter 790.06.

Under the restrictions of FS Chapter 790.06 §790.001(9), individuals who are under 21 years of age or have previously been convicted of a felony do not meet the qualifications for a conceal-carry license in the State of Florida.

As indicated under Jury Case 10.01, individuals will have an opportunity to defend their case if they have been carrying a non-lethal weapon for self-defense purposes. These items may include:

Individuals who took part in an evacuation issued by the Florida Governor under FS 870 Section 252 will also have an opportunity to defend their case in court.

Penalties for Carrying an Unlicensed Concealed Firearm in Florida

According to Chapter 790.01, Subsection 2, carrying an unlicensed firearm in the State of Florida is a third-degree felony. As dictated by Chapter 775.083, individual charged with this offense will face a fine of $5,000.

It is important that an experienced lawyer review your particular charges to determine how to best represent your interests through the life of your case. You do have rights, even when arrested and charged with a crime. These rights are in place to avoid the conviction and punishment of innocent people. It is your attorney’s job to uphold these rights and to utilize the law to work in your favor. Need help representing your rights? Call (888) 484-5057 for a confidential consultation with an experienced Musca Law attorney.