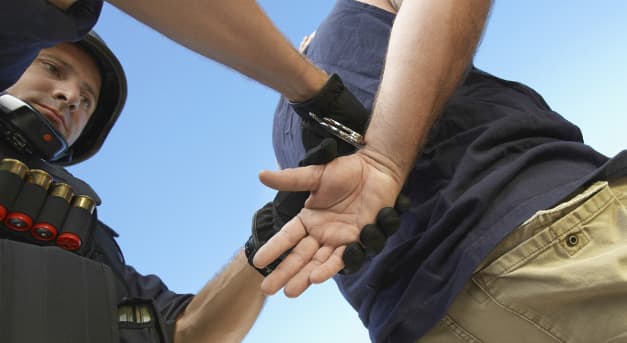 Resisting Arrest without Violence in Florida

Over ten million people are arrested across the United States annually, with hundreds of thousands of them taking place here in Florida. When it comes to making an arrest, law enforcement agencies are unable to predict just how individuals are going to react. For this reason, our state has strict laws in place to protect officers during the process, as well as strict avenues for criminalizing individuals who do not act according to the laws surrounding arrest.

Unfortunately, there are many instances where suspects resist arrest. Although resisting an arrest is a crime in itself, countless suspects escalate the situation and use violence in the process. Every year, there are countless instances where individuals are falsely accused of resisting arrest with violence. It is crucial for those wrongfully accused individuals to contact a criminal defense attorney in Florida as soon as possible, so that we can ensure that they do not face unnecessary penalties for acts they did not commit.

What Does It Mean To “Resist Arrest”?

Individuals who attempt to avoid arrest in one of more of the following ways can face charges for obstruction of justice in Florida for resisting arrest. These include:

When Is Resisting Arrest With Violence Charge Possible?

It is critical to note that individuals can only be charged with resisting arrest with violence if they are actually in the process of being lawfully arrested. Law enforcement officers cannot just arrest and charge any person for resisting arrest with violence. Instead, the arresting officer has to have a lawful reason to detain and arrest the person to begin with. Without a lawful arrest in the process, the case can be dismissed.

It is extremely common for individuals to be charged with resisting arrest with violence in cases where law enforcement officers had no legal right to arrest the suspect. This is one of the most effective defense arguments against a conviction. Sadly, there are many people who are wrongfully convicted of these charges because they do not hire reputable attorneys to fight for their legal rights in court. If you are ever charged with resisting arrest with violence, it is imperative that you contact a criminal defense attorney in Florida as soon as possible.

Although resisting arrest in itself is a punishable crime, there are instances where individuals chose to resist arrest with violence. These charges face even steeper penalties for those who commit these acts.

What Is Resisting Arrest With Violence?

Under Florida Law, the act of resisting arrest with violence includes instances where individuals act to knowingly and willfully obstruct, resist, or oppose any law enforcement officer by committing violent acts toward them or threatening to commit a violent act toward them.

In order to successfully prove an offender was resisting arrest with violence, the prosecution must be able to prove the following required four elements beyond a reasonable doubt:

In order for a person to be charged successfully with resisting an arrest with violence in Florida, the courts must be able to prove the above four elements exist. Working with a skilled and knowledgeable criminal defense attorney in Florida will ensure all legal arguments are analyzed for applicability on your case.

Resisting Arrest With Violence vs. Battery On An Officer

Depending on the circumstances surrounding a person's arrest, they couldn't be charged with battery on an officer. This is a more severe offense that comes with a minimum 5-year mandatory sentence. Individuals can be charged with battery on an officer in lieu of resisting an arrest with violence under specific conditions. First, the defendant had to knowingly and willfully strike or touch a law enforcement agent. Second, it must be proven that the defendant knew the person they struck or touched was a law enforcement agent as defined under state law. Third, the act was committed at the time when an agent was performing his or her legal duty.

Battery on an officer will result in far more severe punishments for the offender. Anyone charged with either of these crimes will benefit immensely by hiring a reputable criminal defense attorney in Florida to defend them in court.

Penalties For Resisting An Arrest With Violence In Florida

Individuals who are charged for resisting arrest with violence can face extensive fines and jail time for their acts. In cases where courts are able to prove the four elements exist, those convicted can face up to five years in prison or five years of probation. In addition, offenders can expect to pay up to $5,000 in fines.

Even acts with minor violence can bring forth extensive legal problems for offenders. With a minimal criminal history, an offender can still face jail time or prison for their actions. Cases with no injury or weapons routinely end with six month jail sentences. When offenders inflict injuries to the victim, most courts will try to impose the maximum sentence for offenders.

Defenses for Resisting An Arrest With Violence In Florida

There are several legal arguments that can be made against a charge for resisting an arrest with violence in Florida. Someone charged with this crime can argue that the officer was not actively engaged in the execution of a legal duty. Simply stopping a person does not place them under arrest. The person would need to be in the legal process of being arrested to actually resist. A person cannot be charged with resisting an arrest with violence simply for not cooperating with law enforcement on a routine stop. The individual has to be under lawful arrest and resisting the officer’s attempts to restrain them.

It is critical to note if the person making the arrest is an officer of the law or someone on the job. If an officer is not in uniform, and they are working off duty as a security officer for a bar or mall, or even a convenient store, they are typically considered to be “on the job” and they are not afforded the same protections under the statute as are officers of the law in uniform. That being said, it is important to note that there are cases where individuals who act violently against these individuals can be charged with Battery on a Law Enforcement officer instead.

Another argument could be made that the actions of the offender were not willful and knowing. Instead, the actions were the result of an officer applying handcuffs or other restraints on to the offender. In some cases, individuals jerk while handcuffs and restraints are being applied. This can cause them to unknowingly strike an officer.

There are also instances where individuals do not know they are being arrested by a law enforcement officer. If an officer fails to identify themselves, or they are not in the proper attire, the defendant may not even realize they are being lawfully arrested or apprehended. As a result, they may feel as if they are being attacked by another person and will defend themselves. There are many instances in which a person has a lawful right to defend themselves. These situations can and often arise when individuals, even law enforcement agents, unlawfully enter into a private home, unlawfully frisk a person, or unlawfully detail a person.

There are also cases where the arresting officer uses excessive force on the defendant. In these cases, defendants conduct actions that are appropriate to repel the excessive force. A lot of time, the force from an officer can cause the accused to have a reflex or a sudden reaction, which can seem like an act of violence. Because of this, the law provides leeway to those who are arrested with excessive force. Individuals in these circumstances have a legal right to defend themselves if police use brutal or excessive force. Conversely, a person is only awarded the ability to defend themselves to the extent that it is believed reasonable given the circumstances. There are cases where violent acts can be justified, but it is highly dependent upon the circumstances at the time of the arrest.

The defense applied to your case depends upon various factors of your arrest. It is imperative to contact a Florida criminal defense attorney as soon as possible to explore legal options available for you. Working with a reputable attorney will ensure you have the best chance for getting your charges dropped so you do not face extensive fines and jail time for a wrongful conviction.

Hire A Criminal Defense Attorney In Florida To Help You

Being charged with resisting arrest with violence can have a major impact on a person’s life. If you or a loved one has been arrested for this crime, it is imperative that you contact a criminal defense attorney in Florida as soon as possible to protect your legal rights and ensure you are not wrongfully convicted.

There are numerous arguments that can be made against a wrongful arrest for resisting arrest with violence. These charges can be extremely expensive and they can have a lasting impact on a person’s criminal record and civil rights. Individuals charged with this crime can spend years in jail, pay thousands of dollars in fines, and have a permanent mark on their record that prevents them from working certain jobs. In order to ensure your legal rights are protected, it is imperative for you to contact a criminal defense attorney who is well-versed in handling these cases.

Attorneys at Musca Law have over 150-years of combined experience helping those who have been wrongfully accused defend themselves and their freedom. Our knowledgeable attorneys provide aggressive and reliable representation that helps those charged with crimes avoid wrongful convictions that can have a major impact on their lives and freedom. If you were accused of resisting arrest with violence, contact our law firm any time at (888) 484-5057 to get representation you can trust. Our attorneys are standing by around-the-clock to offer you a free, no-obligation initial case consultation to see how our services can best support you and your case.